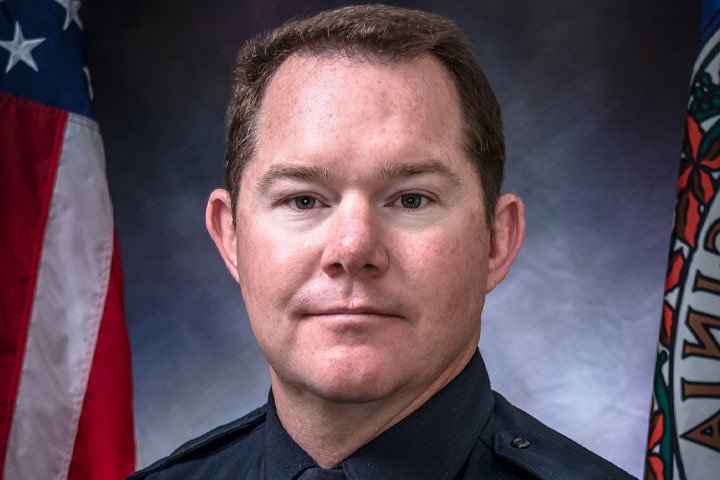 Undersheriff Struzzieri has served the Virginia Beach Sheriff’s Office for nearly 19 years and has worked in every division: Correctional Operations, Court Security, Transportation and Civil Process. He has served as Chief Deputy of Operations for the past four years. He is the first Undersheriff in Virginia Beach to be promoted through the ranks, having started as a Deputy Sheriff in September 1999.

He replaces former Undersheriff Bruce Benson, who retired on April 30 after more than 22 years of service to the City of Virginia Beach – on the Police Department and with the Sheriff’s Office.

Their promotions are effective today. Chief Deputy Holcomb will oversee Administration and serve alongside Chief Deputy of Operations Victoria Thomson.

Undersheriff Struzzieri is from Norfolk and graduated from Booker T. Washington High School. He served two years in the Navy as a boatswain’s mate and two years as a jail officer with the Hampton Roads Regional Jail. After joining the Sheriff’s Office, he earned his bachelor’s degree in criminal justice from Saint Leo University and his master’s degree in criminal justice from Troy University. He is a graduate of the West Point Leadership Course and FBI National Academy and is in his third year of the Virginia Law Reader Program.

He has served under three Sheriffs: Frank Drew, Paul Lanteigne and Ken Stolle. His accomplishments at the Sheriff’s Office include establishing the Criminal Intelligence Unit when he was a Lieutenant. That unit has grown from one to 13 people – plus two canines – and is responsible for improving safety inside the Correctional Center and working with local, state and federal law enforcement agencies to solve and prevent crimes, including investigating the first Racketeer Influenced and Corrupt Organizations Act (RICO) case prosecuted in Virginia. He oversaw implementation of the Security Housing Unit, Reentry Program and efforts to improve mental health treatment and prevent suicides in the jail. During his time as Chief Deputy of Operations, the Sheriff’s Office has received 100 percent scores on all independent audits and inspections, including by the Virginia Department of Corrections and U.S. Department of Justice.

“Throughout my law enforcement career, I have always put the safety of the public and the safety of our personnel first,” said Undersheriff Struzzieri. “Those will continue to be my priorities as Undersheriff. We must continue to improve training and pay for our deputies, make the jail a safer environment for everyone who lives and works there and demand excellence in everything we do at the Sheriff’s Office. Those are the standards that Sheriff Stolle has set and that I will uphold as Undersheriff.”

Chief Deputy Holcomb is from Onslow County, N.C. He served eight years in the Marine Corps as an infantryman (three years of active service and five years as an inactive reservist). After joining the Sheriff’s Office, he earned his bachelor’s degree in organizational leadership and management from Regent University and graduated from the West Point Leadership Course. He is an active volunteer, dedicating his time to the Pungo Strawberry Festival, Kempsville Meadows Elementary School and the Mt. Trashmore Family YMCA. In 2017, he won a special election to represent the 85th District in the Virginia House of Delegates. He served during the 2017 legislative session, helping successfully carry bills to improve mental health treatment for jail inmates (HB2184) and expand access to contraception (HB2267).

He has also served under Sheriffs Drew, Lanteigne and Stolle. During his career at the Sheriff’s Office, Chief Deputy Holcomb has served as commander of the Emergency Response Team and championed efforts to improve mental health treatment for inmates, including by creating the Mental Health Housing Unit and a gardening therapy program, Operation Green Thumb. He created the K9 Unit under the supervision of Undersheriff Struzzieri, acquiring and training two canines to detect narcotics and explosives. Last fiscal year, the K9 Unit conducted more than 1,700 operational searches and took nearly $500,000 in narcotics off the streets, in addition to making arrests and seizing illegal firearms and cash. As Captain of the Classification Division, he also was instrumental in the creation of the Reentry and Veterans programs. The Reentry Program is one of the most successful in the state, with an 85 percent success rate.

“I have dedicated my life to public safety and to the proper treatment of everyone I come into contact with as a member of law enforcement,” said Chief Deputy Holcomb. “I am honored by the trust Sheriff Stolle has placed in me. As Chief Deputy, I will continue working to make Virginia Beach safe for my family and for all our families.”

If you have any questions or require additional information, please contact: Kathy Hieatt, Public Information Officer: 757.385.8446.