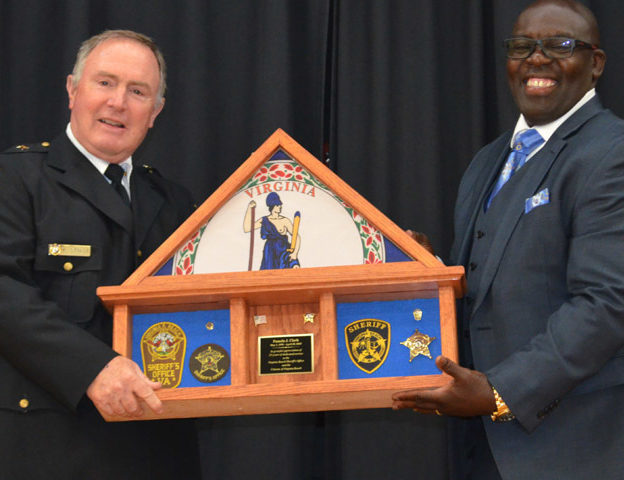 In addition, the Sheriff’s Office honored its veterans by presenting them with a uniform pin recognizing their branch of service and presented two deputies with lifesaving wards.

The ceremony also honored the office’s retirees. Since August, one corporal, one deputy and one K9 have retired from the Sheriff’s Office with more than 50 years of combined service. K9 Roxie was the VBSO’s first explosive-detective K9 – and its first K9 retiree – and served from 2013-2019, conducting 5,400 operational searches.

Deputy Allen Meredith received the Silver Cross Award, which goes to individuals who distinguish themselves through extraordinary acts of bravery. On the night of May 3, 2018, Deputy Meredith was off-duty and returning home with his wife when he encountered a young woman calling for help outside a burning condominium in the 5200 block of Summer Crescent. He ran inside the home and ensured that everyone was safely evacuated, including an elderly woman located upstairs. He attempted to extinguish the fire, but realized that he could not safely contain it, so he ensured that the neighbors were also evacuated until the Virginia Beach Fire Department could respond.

Deputy Meredith is assigned to Correctional Operations and is a 17-year veteran of the Sheriff’s Office.

Cpl. Marlon Ramirez received the Life Saving Award, which goes to individuals who distinguish themselves by performing extraordinary acts or rendering lifesaving techniques to aid in the preservation of human life. Just after midnight on Oct. 6, Cpl. Ramirez was working part-time at the Denny’s on Virginia Beach Boulevard when he noticed a woman frantically asking if her husband was OK. Cpl. Ramirez and his partner approached the table and found that the man could not speak and appeared to be choking. Cpl. Ramirez performed the Heimlich maneuver and successfully dislodged a piece of food from the man’s airway.

Cpl. Ramirez is assigned to the Power Shift, which is part of Correctional Operations, and is a 13-year veteran of the Sheriff’s Office.

Sheriff Ken Stolle congratulated those who earned promotions and thanked the retirees for their dedicated years of service. He also commended the office’s veterans and award recipients.

“I can’t think of a greater honor than to be asked to protect your community and the families of your community,” said Sheriff Ken Stolle. “You stand in harm’s way for the people of Virginia Beach every day and there’s no way that I can thank you for that, but I’ll always remember what you do and how you’ve done it and I’ll remember that you’re family.”

Virginia Beach City Councilman Michael Berlucchi was the guest speaker, applauding the Sheriff’s Office for its community service, its role in making the Something in the Water festival wee​kend a success, its inclusiveness, and its dedication to reducing recidivism and helping the mentally ill.

“What’s so impressive to me as a citizen and as a member of our community is also how much everyone at the Sheriff’s Office truly cares about our city and the people who live in our city and how your actions reflect your commitment to service and reflect that dedication to everyone who lives in our city,” said Councilman Berlucchi.

If you have any questions or require additional information, please contact: Kathy Hieatt, Public Information Officer: 757.570.9123.