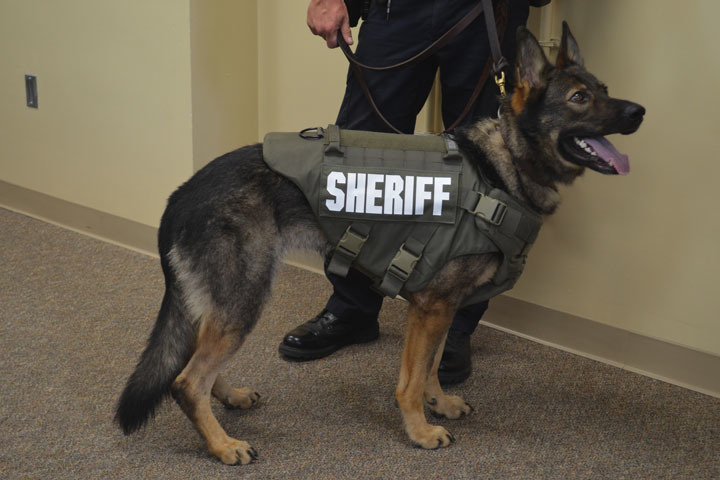 The Virginia Beach Sheriff’s Office K9s today received protective vests donated by the Atlantic K-9 Vest Fund. The vests, valued at approximately $1,200 each, will help protect the dogs in the event of a stabbing or shooting.

The Virginia Beach Sheriff’s Office K9 Unit was established in 2014 and consists of K9 Candy and K9 Roxie with their handlers Deputy Jeff Lam and Deputy Aaron Whitehead. Their work includes daily searches of the Virginia Beach Courthouse and Correctional Center.

The Armor Express TEX 10 K-9 vests are bullet-proof and stab-proof and were custom-fitted for the dogs. The vests weigh less than 7 pounds each.

Sheriff Ken Stolle and everyone at the Sheriff’s Office are immensely grateful for the generous work of the Atlantic K-9 Vest Fund to protect these important members of our law enforcement family.

“Law enforcement is becoming more and more dangerous and these dogs are a vital tool for keeping our deputies and our community safe,” said Sheriff Stolle. “We appreciate everything the Atlantic K-9 Vest Fund has done to make our job just a little easier for us and a lot safer for our K9s.”

K9 Candy is a 4-year-old German Shepherd obtained through a grant and trained in narcotics detection by Deputy Lam with help from the Norfolk Police Department. She is trained to sniff out a variety of substances, including marijuana, cocaine and heroin. In addition to helping keep the Virginia Beach Correctional Center free of illegal drugs, K9 Candy and Deputy Lam assist state and local law enforcement with narcotics investigations and interdictions. During the 2015-2016 fiscal year, they helped seize more than 55 pounds of illicit narcotics worth nearly $160,000.

K9 Roxie is a 4-year-old Labrador-Schnauzer mix trained in explosives and firearms detection and donated to the Sheriff’s Office by the U.S. Navy. K9 Roxie and Deputy Whitehead conduct daily searches of the Virginia Beach Courthouse and its parking lots. They are also available as needed to search other public spaces, events and schools. During the 2015-2016 fiscal year, they performed more than 400 operational searches.

The Atlantic K-9 Vest Fund is a nonprofit group based in Newport News that raises money to provide protective vests for K9 officers, with a focus on law enforcement agencies along the Atlantic seaboard. It was founded in February 2016 after the fatal shooting of Norfolk Police K9 Krijger. K9 Krijger was not wearing a protective vest.

The fund is accepting donations and applications for K9 vests. Visit atlantick9vestfund.org for more information.

Questions and requests for additional information should be directed to: Kathy Hieatt, Public Information Officer: 757.385.8446.