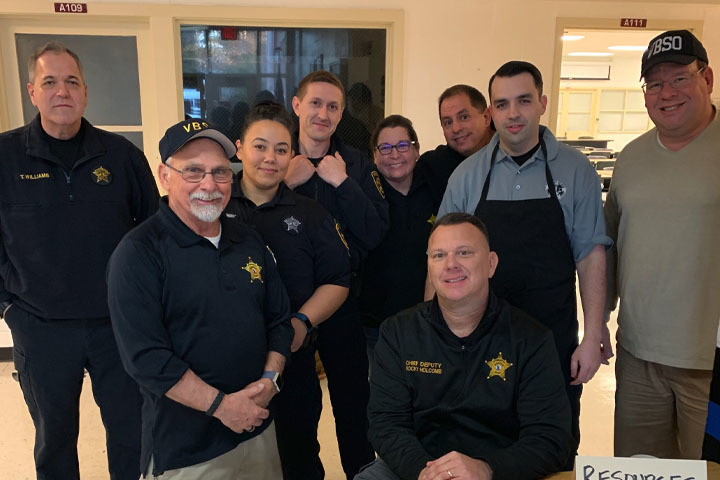 The Virginia Beach Sheriff’s Office will be providing free meals to furloughed federal workers and their families starting this Monday, Jan. 21.

Resources permitting, the program – Dinner with a Deputy – will be ongoing during the duration of the partial federal government shutdown. Dinner will be served from 5-7 p.m. at the Law Enforcement Training Academy located at 411 Integrity Way on the following dates:

Depending on the duration of the shutdown, additional donations and sponsorships will be needed to continue the program.

“We recognized a need in our community and we’re stepping up to meet it,” said Sheriff Ken Stolle. “No one should go hungry, especially when their pay is being withheld through no fault of their own.

Federal employees who are working without pay are asked to present their work identification card.

recognized the outstanding service and contributions of appointees who have earned promotions and who have retired during the past four months during a ceremony at the Law Enforcement Training Academy. The event recognized 11 promotions and five retirements.

The promotional process at the Sheriff’s Office is extremely competitive and weighs deputies’ performance, experience, tenure, leadership, volunteerism, training and education. The honorees received promotions to corporal, sergeant, lieutenant, captain and chief deputy. In addition, the ceremony marked the promotion of former Chief Deputy of Operations Brian Struzzieri to undersheriff, making him the first undersheriff in Virginia Beach history to start as a deputy sheriff and work his way up the ranks. Undersheriff is the office’s highest appointed rank. Undersheriff Struzzieri started at the Virginia Beach Sheriff’s Office in 1999.

Virginia House Del. Barry Knight congratulated those who had been promoted, saying, “I know you will continue to make the Sheriff’s Office the standard the Commonwealth needs to see.”

The ceremony also honored the office’s retirees: two civilians, one deputy, one sergeant and former Undersheriff Bruce Benson, who served the City of Virginia Beach for more than 23 years, including 15 with the Virginia Beach Police Department and 8½ with the Sheriff’s Office. The retirees served a combined total of 70 years and seven months.

“We want to say thank you. You will be remembered,” said Chief Deputy of Operations Victoria Thomson. “We are all always going to stand behind you and we are always going to honor you.”

Sheriff Ken Stolle congratulated those who had earned promotions and thanked the retirees for their loyal service to the citizens of Virginia Beach. He also spoke about former Undersheriff Benson and his contributions to public safety.

“There have been a lot of significant changes to the Virginia Beach Sheriff’s Office in the past nine years and I think Bruce was at the forefront of every one of those changes,” Sheriff Stolle said. “Bruce, I think you have changed our world and our community for the better.”

If you have any questions or require additional information, please contact: Kathy Hieatt, Public Information Officer: 757.570.9123.