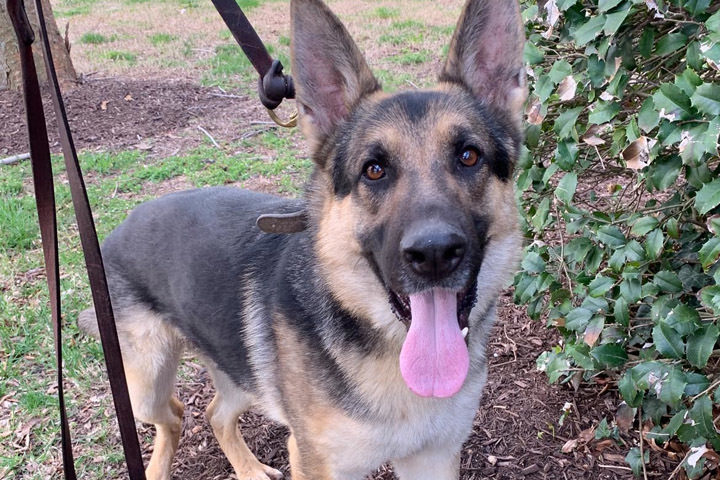 K9 Gaston is a 3-year-old German shepherd given to the Sheriff’s Office this year by an anonymous donor. He came fully trained and is valued at $15,000. He earned his Virginia Police Work Dog Association certification in February and has since completed 120 operational searches and 50 hours of additional training. His primary function – working alongside his handler, Deputy Aaron Whitehead – is to screen the Virginia Beach Courthouse and other public areas for the presence of explosives or firearms.

The Virginia Beach Sheriff’s Office K9 Unit was established in 2013 and consists of two dogs and two handlers. In addition to K9 Gaston, K9 Candy is a 7-year-old German shepherd trained in narcotics detection. Since joining the VBSO in 2013, K9 Candy and her handler have completed thousands of operational searches and helped seize more than 1,200 pounds of marijuana and one kilogram of heroin. Kathy Hieatt, Public Information Officer: 757-385-8446, khieatt@vbso.net

“The Virginia Beach Sheriff’s Office K9 Unit is a vital tool in our mission to protect the citizens of Virginia Beach. Our K9s are also cherished members of the Sheriff’s Office family,” said Sheriff Ken Stolle. “K9 Gaston and his handler ensure the safety of the thousands of people who come and go from the Virginia Beach Courthouse every day. They also help protect our schools, concert venues, workplaces, race courses and other locations any time they are needed.”

“We are grateful for K9 Roxie’s dedicated service to our community and hope she enjoys her well-deserved retirement,” Sheriff Stolle added. “We are also grateful to our donors who have made these assets available to us at no cost to taxpayers.”

If you have any questions or require additional information, please contact: Kathy Hieatt, Public Information Officer: 757.385.8446 or khieatt@vbso.net.