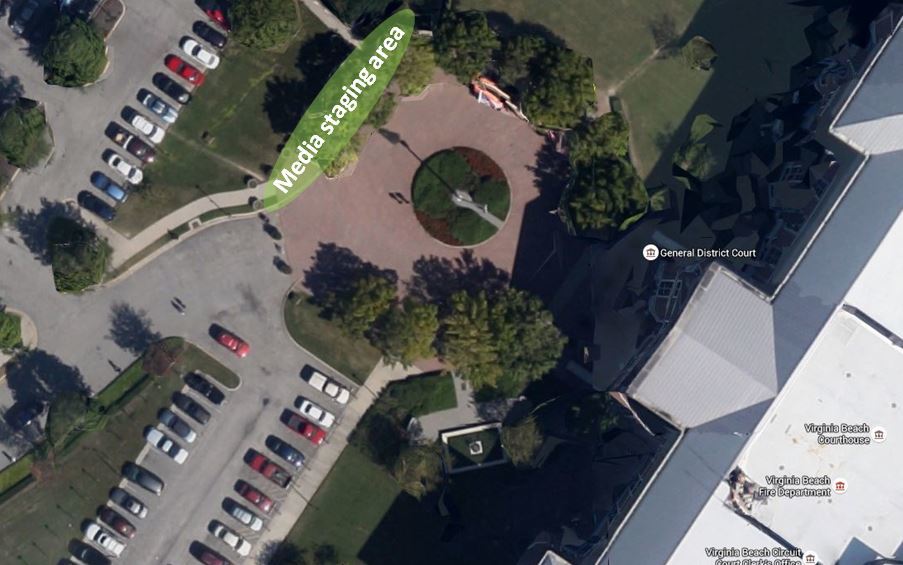 Members of the media are afforded the same access to the Virginia Beach Courthouse as members of the pubic and are expected to follow the same rules and regulations, including security screening.

Members of the media who would like to request a pass to bring electronic devices, including a cellphone, tablet and/or laptop, into the Courthouse, should submit an application through Chief Deputy Circuit Clerk Tracey Entwisle’s office, located on the third floor of the Courthouse Extension (Building 10B). There is a $10 application fee and new applicants must include a letter from their supervisor explaining why they need to have their phone/electronics in the building. Each media outlet is allowed up to five passes, which are non-transferable. Each pass is good for the calendar year. Processing the application typically takes at least one week. Ms. Entwisle can be reached at 757-385-8819 or tbentwisle@vacourts.gov.

Possession of a cellphone/electronics pass permits the holder to bring electronic devices into the Virginia Beach Courthouse only. Cellphone use is not permitted in any Virginia Beach courtroom. Electronics, including cellphones, must be turned off and put away while in the courtroom. Failure to abide by these rules may result in permanent revocation of your cellphone/electronics pass and possible action by the judge, up to and including contempt.

Media requests to photograph or film any court proceeding must be made to the presiding judge at least 24 hours in advance. Media outlets may be required to pool video. Permission to film a court proceeding extends to that courtroom only and filming is not permitted inside the hallways or other areas of the building.

Contacts for each court are:

The forms to request camera access to a hearing taking place in General District or Circuit court are attached on the right hand side of this page.

Filming, including on-camera interviews, is prohibited inside the Virginia Beach Courthouse without explicit permission from the Virginia Beach Sheriff’s Office. Interviews and other filming should be conducted in the designated media staging area adjacent to the Courthouse entrance (across from the traffic circle).

Media inquiries regarding safety and security at the Virginia Beach Courthouse should be directed to VBSO Public Information Office at pio@vbso.net or 757-385-8446. Inquiries about any specific case should be directed to the attorneys involved. The Commonwealth’s Attorney’s Office Public Information Officer, Macie Allen, can be reached at 757-385-8545 or mpallen@vbgov.com.

For additional court information including case lookup and docket information, visit the Courts site on VBgov.com.