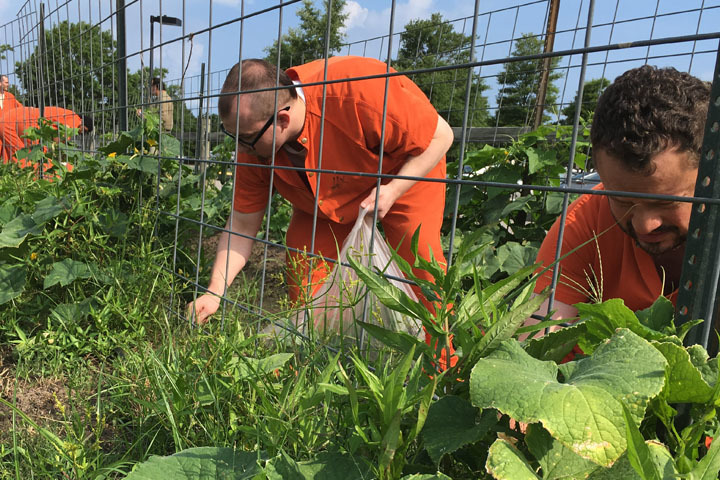 The Virginia Beach Sheriff’s Office recently launched Operation “Green Thumb”, a program to provide inmates suffering from mental health issues with the opportunity to work outside in the jail’s Inmate Garden. The goal is to help improve their overall wellbeing through horticultural therapy at no added cost to taxpayers. The Sheriff’s Office this morning invited members of the media to cover the operation and see firsthand the benefits it provides.

Operation “Green Thumb” was started in June and has been an ongoing effort. Weather permitting, deputies escort small groups of 3-6 inmates from the Mental Health Block to the Inmate Garden located outside the facility 2-3 times a week. They stay outside for about an hour, weeding and working in the garden. The program is voluntary and only inmates on “green status,” meaning they are stable on their medication (if prescribed) and do not pose a threat to themselves or others, are eligible to participate. Appropriate security precautions are taken, including having the inmates wear shackles and be supervised by deputies.

The program has been a success so far, said Capt. Rocky Holcomb, who started the initiative.

“It gives them something to look forward to,” he said. “They get to go outside, take ownership of something and be a part of something that’s bigger than just doing time.”

When harvest time comes later this summer, the inmates will get to enjoy some of the fruits of their labor.

Capt. Holcomb, a 25-year veteran of the Sheriff’s Office who oversees the Criminal Intelligence Unit and Classification Division, created the program as a way to help the jail’s mental health population.

“Our leaders in Richmond and Washington are doing the best they can to help us address this problem,” he said. “In the meantime, we have to find ways to bridge the gap and provide these inmates with the best possible treatment and outcomes. Operation ‘Green Thumb’ is just one way of doing that.”

Mental health is the biggest issue facing local jails. Even though jails are ill-equipped to provide quality mental health treatment, they are increasingly required to do just that. Many inmates receive little, if any, help until they’re incarcerated and there isn’t enough space for all of them at state mental health hospitals.

Still, jails have limited resources with which to provide these inmates with the help they need. Programs such as Operation “Green Thumb” are an inexpensive way to supplement medication and counseling.

Approximately 400 of the 1,300 inmates housed at the Virginia Beach Correctional Center have been diagnosed with a mental illness, ranging from depression to schizophrenia.

Working with its medical contractor, NaphCare Inc., the Virginia Beach Sheriff’s Office has increased the number of counselors available to inmates. During the 2014-2015 fiscal year, the medical staff wrote 14,775 prescriptions for psychotropic medication for 5,913 inmates at a cost of more than $257,000.

The ¼ acre Inmate Garden was planted in 2010. Its produce goes to supplement inmates’ meals and support local charities, such as the Judeo-Christian Outreach Center’s meals for the homeless. It is primarily worked by the Inmate Workforce and its current crop includes tomatoes, cucumbers and peppers.

Questions and requests for additional information may be directed to Public Information Officer Kathy Hieatt at 757-385-8446 or khieatt@vbso.net.